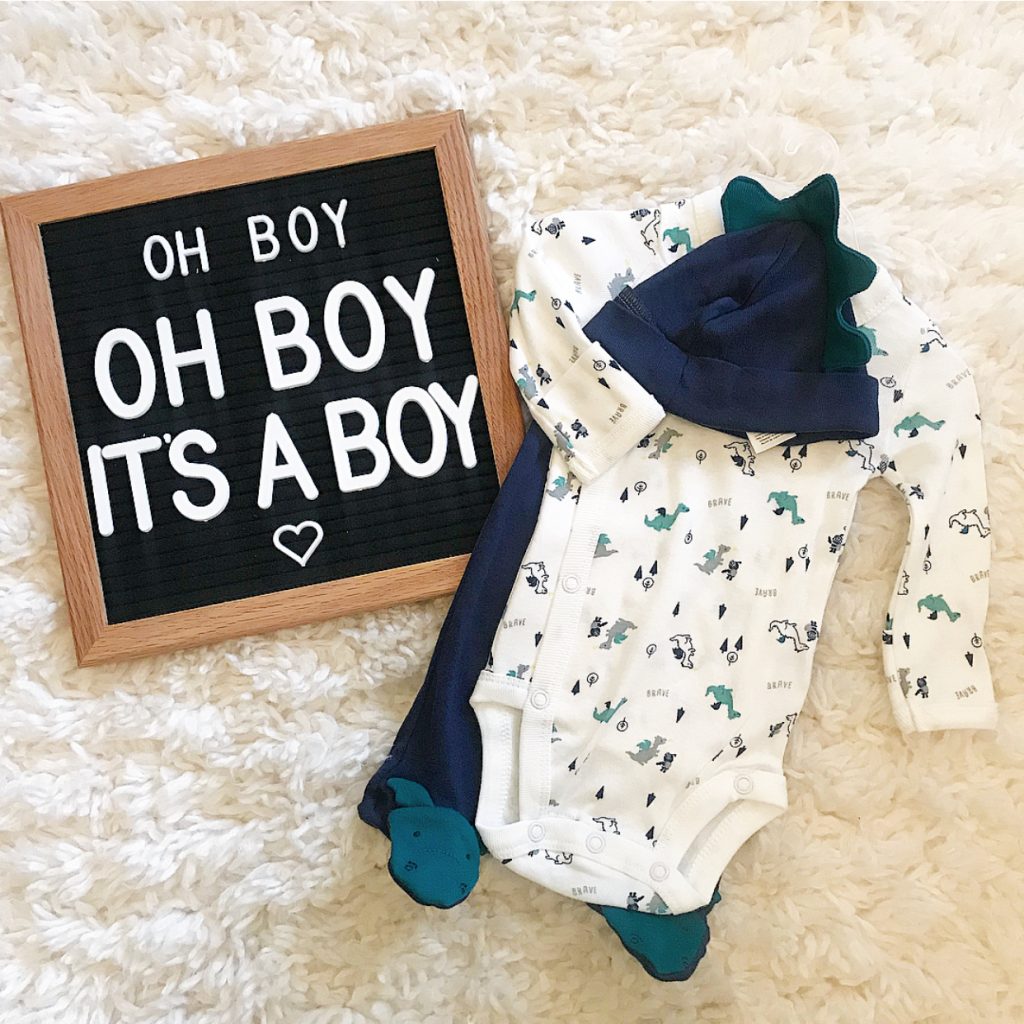 We now have the news that my kids have been chomping at the bit for weeks and weeks to find out — whether they will have a baby brother or a baby sister! It’s so weird to find out the baby’s gender before I even had a baby bump! When you’re over 35 and pregnant it’s recommended you take the Harmony prenatal test around 10-13 weeks, which analyzes the DNA to access the chances of Down Syndrome and other conditions. A side benefit of the testing is they can tell whether the baby is a boy or a girl a lot earlier in pregnancy. I had to wait until about 19-20 weeks to find out what I was having in my first two pregnancies — ahh the patience that takes! I can say with relief that we had good news and so far we have a healthy baby. So now it’s time for the Baby Gender Reveal… oh boy, oh boy, IT’S A BOY!!

This started out as a house divided… well, really just the kids declaring what they wanted and remaining steadfast in how anything different would be unacceptable. I was worried about my son, Leo, who seemed to have a melt down any time you asked him what he’d do if he had a baby sister. Annabelle had her heart set on a baby sister on another level. She was desperate for another girl in the family, after all, she has 3 boy cousins and another boy cousin on the way. That means no little girl to play with during holidays and family vacations. 🙁 That being said; when I asked how she’d feel if she had a baby brother she always said she’d be OK with it. PHEW! I reminded them that we don’t get to decide, it’s up to God! Annabelle did explain, however, that God knew there were a lot of boys in our family so he’s probably going to give us a girl.

When we heard the baby’s heartbeat it was on the faster side, which is more indicative of a girl, and our nurse practitioner said if she had to guess she’d say it’s a girl. I had dreams with neon pink flashing signs that said GIRL, and the Chinese Calendar said girl! A lot of signs pointed to pink, and as much as I didn’t want to admit to it, I think a part of me wanted to give Annabelle her baby sister. I wanted to give her a little girlfriend for life and make her happy. I felt like Leo had plenty of boys to play with in his cousins! And it seems like pretty much everyone in our family was sort of rooting for Annabelle to get a sister, too.

When I found out it was a boy over the phone, I did shed a tear for Annabelle. Not because I was sad I was having a boy, but I knew she’d be pretty upset. I had cute little baby gender reveal cupcakes made with pink and blue whipped icing on top with a shot of blue filling in the middle. When I picked the kids up from school I told them I received a call from the doctor and I had cupcakes with blue or pink filling for them at home. They were so excited to get home and bite into them! 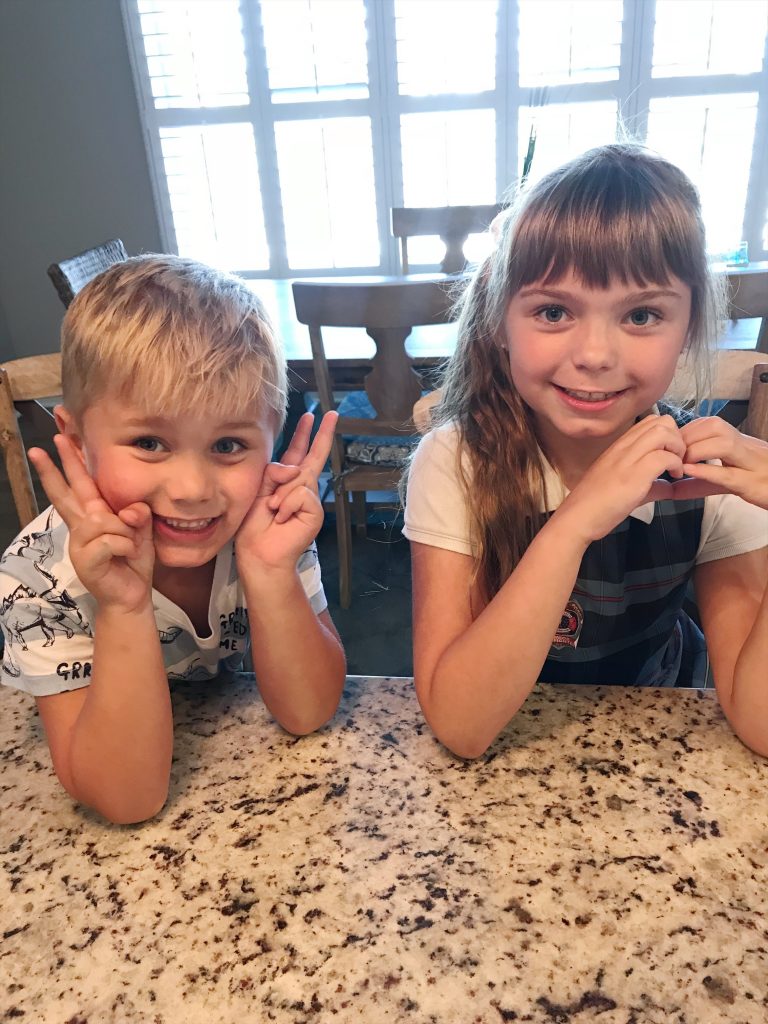 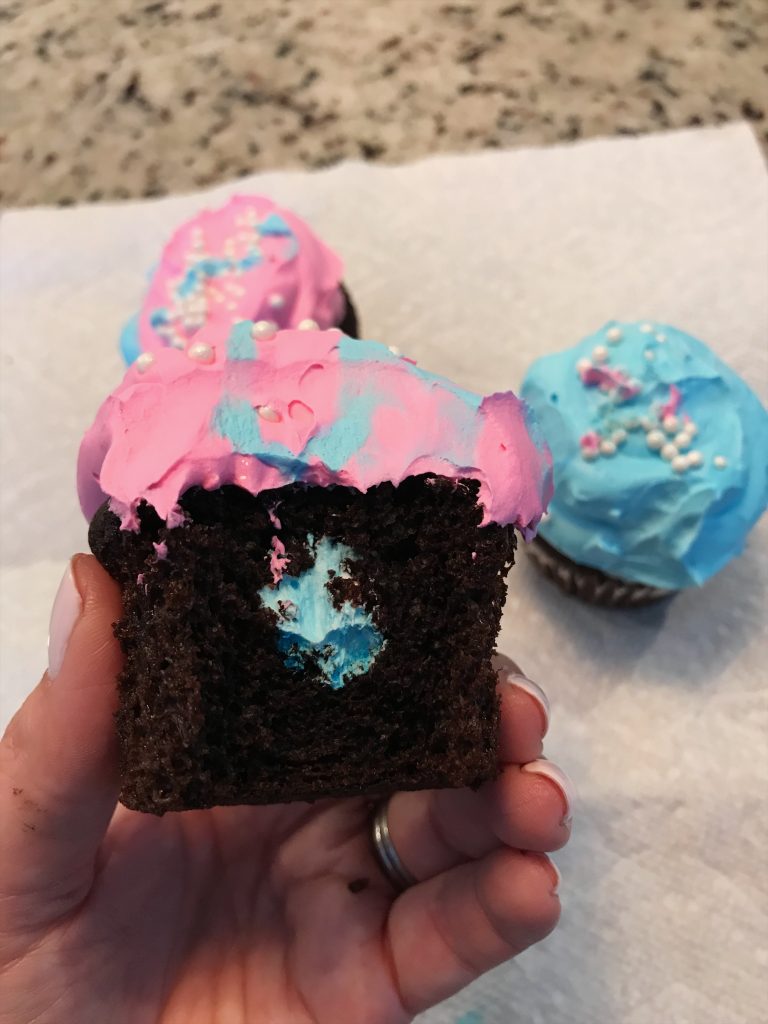 I recorded them eating the cupcakes and when I asked Annabelle if she’d seen any filling in the center she showed me her cupcake, revealing blue inside. I asked her what that meant, and she shrugged her shoulders and mumbled “I don’t know” with a mouth full. Oh man, she was in denial! Leo said; it means it’s a BOY — all smiles!! I asked Annabelle how she felt about that and she covered her face with her hand and said she was scared…. we asked why, and she said because she will be surrounded by all boys. Her bottom lip curled and tears started to spill from her eyes — I quickly stopped recording. In that moment I felt her heartbreak and I hugged her, trying to conceal my tears for her little broken heart. Agh, I hated seeing that. So I rattled off a big promise that when our dog got a couple years older we’d get her a girl puppy and she can name it! That seemed to help her out a bit!

P.S. I’m really glad I decided to find out over the phone what I was having when the doctor called. I was all about having a baby gender reveal party with friends, but considering how the news went over with Annabelle it’s best she didn’t have an audience! 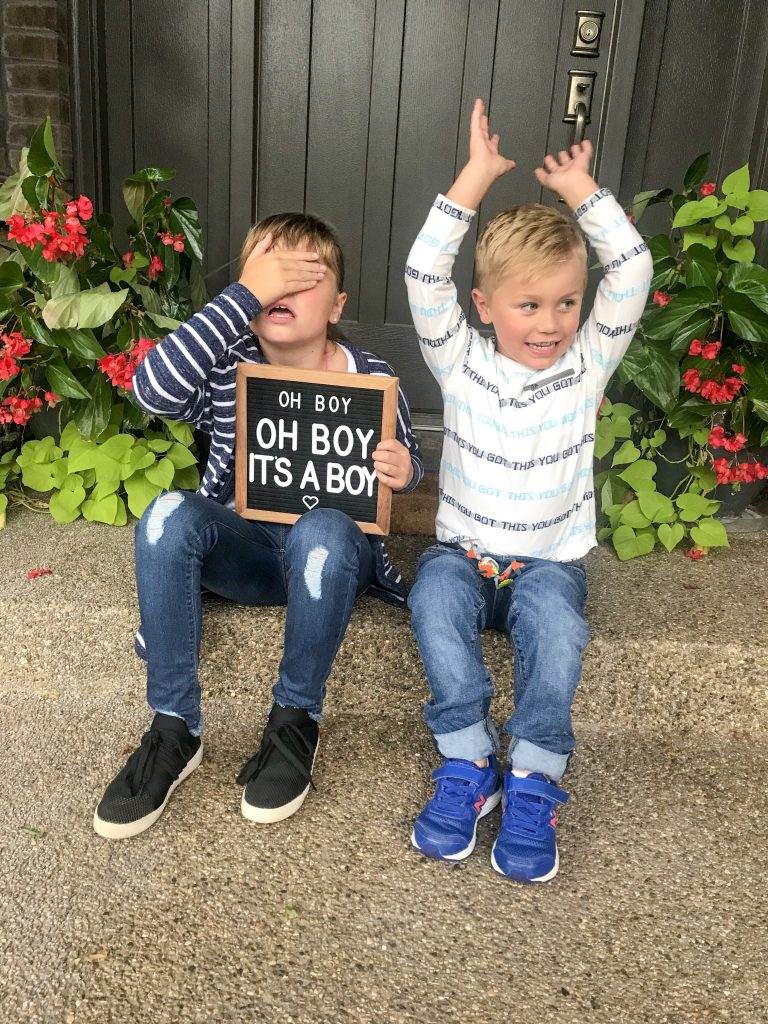 Thankfully after a good night’s sleep Annabelle felt much better the next day. She wrote me the sweetest thank you card on the way to school that said I was the best mommy and she was excited about her baby brother — and her new puppy! Ahh, she is the sweetest little girl and I love her more than I could ever explain! 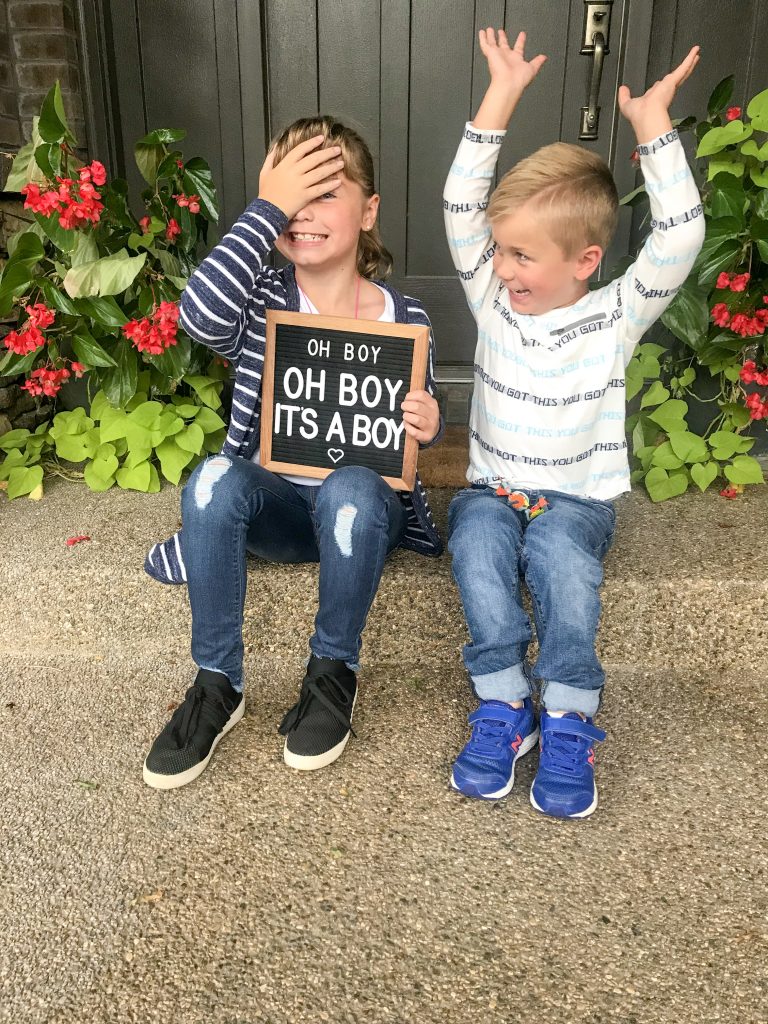 To get the kids excited I took them to Target the next day and said they could each pick out a baby outfit for their little brother. It was so cute to see them oohhing and ahhing over all the baby stuff! It was fun walking the baby aisles again, it definitely made things feel more real! 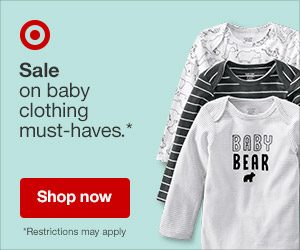 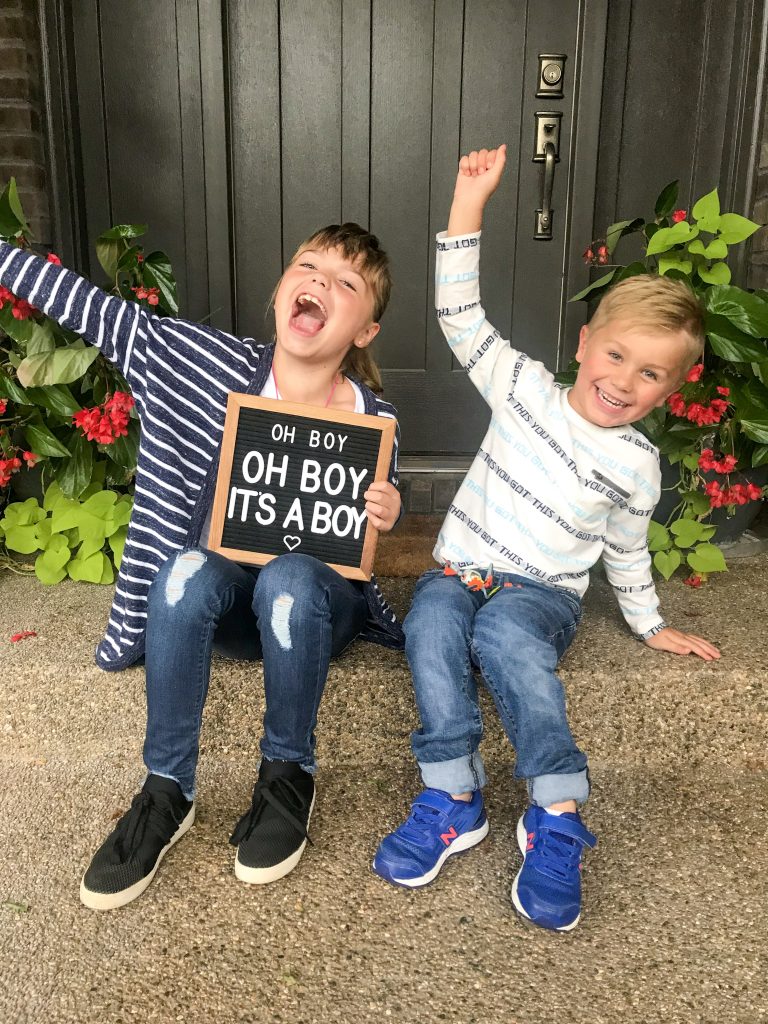 So now we know that our little family of four will soon transition to a big sister and two little brothers! It feels good imagining our future family of five. I have moved along the pendulum of emotions from fear and anxiety to the sweet spot of excitement! Let the nursery planning, baby naming, and nesting begin!! I can’t believe this is our life now, but I wouldn’t have it any other way! 🙂

Let’s be internet friends! Never miss a hilarious thing I say or heartwarming post like this by subscribing to my blog newsletter HERE. 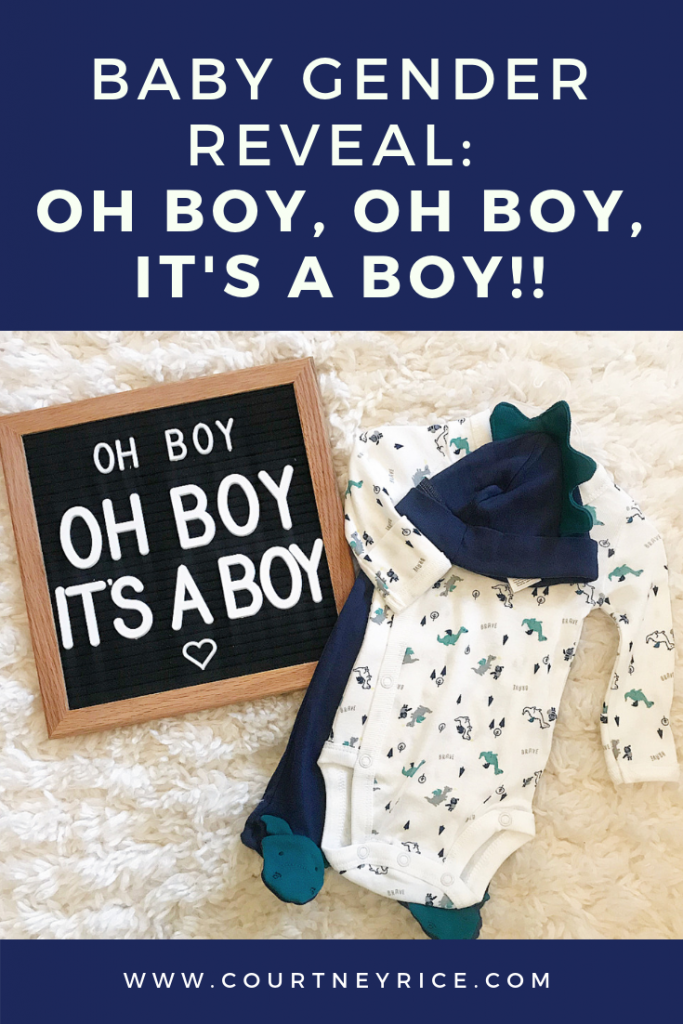 I'm Courtney, an Indianapolis based wife and mom of an incredibly sweet girl and two adorable boys! I love blogging about mom life, pregnancy, style finds, fitness, and girl boss topics. I'm all about moms getting their groove back after kids! Nice to meet you, I'm the voice behind this lovable little blog! Grab a glass of wine and let's have some fun! :)